How to Make Money in the New Economy

In the old economy, only central banks are granted the authority to issue money directly, so their values tend to override everyone else’s. By issuing money with interest, they primarily communicate two values: continuous exponential expansion of the economy, and constant upwards redistribution of wealth (towards the money lenders). Virtually everyone who participates in the old economy becomes trapped on a hamster wheel of “getting ahead” in a purposefully engineered environment of artificial scarcity and perpetual economic “growth.” We are programmed to believe that this is what we value, and that no other economy is possible; but is this truly so?

The globalization of the old economy has resulted in a large-scale systemic subordination of human values to the “interests” of investment banking. In order to issue communications about our values, we first need to borrow money from a bank. Because money is only ever borrowed into existence (at interest), debt repayment and compound interest are baked into the prices we pay for everything—from groceries to salaries to taxes. In this way, the values of investment banking (exponential growth and upward redistribution of wealth) ultimately override whatever values we are actually trying to communicate through our economic activity.

Somewhere along the way, we developed the backwards notion that “making money” meant earning money, whether by investment, labour or salesmanship—as if we needed to earn the right to communicate our values. Perhaps the wool has been so thoroughly pulled over our eyes that, having delegated our power to create money, we think the only way to “make it” is to take it. 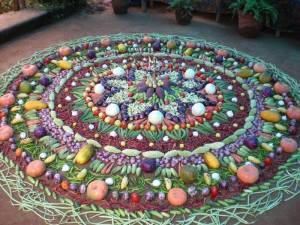 In any economy you make money by issuing it, either by spending or lending it into existence. Those who issue money, then, are by definition the ones with the power to make it. One of the defining features of the new economy is that the power to make money shifts away from central banks and investment firms, into the hands of living individuals. In the new economy, we make money by issuing communications about what we truly value—our authentic needs and desires, and our true gifts and offerings. The profit motive is displaced by a deeper motivation to create social value by the mutual exchange of our gifts.

Although many of us have shifted our consciousness into this new way of being, virtually all of us are compelled to engage in various ways with the lingering infrastructures of the old economy. Thus, in order to make the new economy a living reality, we have to envision the transitional steps between old and new, and mobilize our energies around making those transitions today.

The shift in consciousness and behaviour is actually the first and most important step. We need to liberate ourselves from the hamster wheel, discover our innate gifts and learn how to communicate our offering of these gifts to the world. We need to stop chasing the carrot of endless economic growth and advancement, consciously determine what our actual needs and desires are, and communicate these needs in a straightforward and self-empowered manner. Above all, we need to stop the cycle of consumerism, and build a life that is truly in alignment with our purpose here on this divine planet. These are the living foundations of the new economy.

But this in itself is not enough. So long as we continue to enable central banking currencies, we are in fact not making money, but feeding a malignant tumor which continues to suck the life out of the planet at an ever accelerating rate. We must insist that our governments reclaim the money supply from central banks (through initiatives such as positivemoney.org), and simultaneously create, promote and participate in alternative currencies, lending communities and pure gift economies (see New Economy Coalition for examples). Ultimately, the new economy will lead us towards a moneyless society—or at least to such a profound transformation of money that we no longer recognize it as such. Along the way, transitional currencies and the transformation of mainstream currencies will play an important role. Most importantly, “we the people” need to reclaim our inherent right (as living beings) to issue money directly, purely for the sake of making unhindered communications about our authentic values.