Why I share my failures, how it helps you and why you really “should” be clamoring for more

Recently we did a survey so we could decide where to go next with our business model. In it, I saw a couple of candid responses that let me know that some of you are, well let’s just say, confused about who to be getting your business advice from.

You haven’t bought my programs because I so candidly share my failures that you wonder if you should be learning from me. If the person you are learning from doesn’t share their failures, run the other way. Now.

They are hiding from you, putting their failure in shadow (yeah, its embarrassing to let it all hang out and takes a lot of guts, but fuckin’-a it’s worth it) guess who is going to make the mistakes they aren’t telling you about?

Here’s something you aren’t considering.

You will take on the shadow of your mentor.

You’ll suddenly find yourself trapped in a sucky business model having made huge investments with a life that looks awesome from the outside, but pretty much sucks ass inside because it’s so incongruent with your truth.

Or maybe you’ll discover that the pot of gold is an illusion all together.

Don’t you remember that failure is the path to success?

You read the quotes, forward them all over Facebook … …  and yet you only want to learn from mentors who hide the truth of their experiences or only tell you about them when they are years passed.

I share my failure as it’s happening because I don’t want you to idealize me.

I want you to learn the truth from me and then operate your business with your eyes wide open.

I believe you can learn from my failures and as a result evolve into making new ones of your own that you can then share and by doing that we will speed up this evolution process.

Now, I do admit, I have made a mistake. (Of course I do because that’s my M.O. You learn from my mistakes.)

I have focused a bit too much on the failures and have not let you know how much those failures have led to me living the dream I know you want.

So bear with me while I brag for a minute. (I’m learning how to do this in Mama Gena’s Mastery Course.)

Here I’ll make a list because that’ll make it easier for me:

1. I can say fuck as often as I want in my emails, newsletters and blog posts without fear that my clients will runaway screaming. 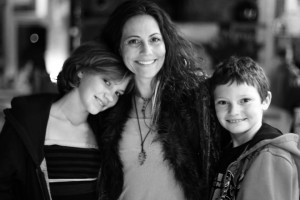 2. My kids (including my 13-year old daughter) LOVE hanging out with me and are all around awesome.

They still exhibit occasional signs of trauma from the YEARS I worked like an insane person, but it’s mostly been ameliorated. They are not only not traumatized by my divorce and bankruptcy but they have learned two key things:

3.  I have a great income from two businesses I absolutely love that love me back.

I probably don’t mention this enough because I have a bit of trauma from what happens when I talk about my income (people like to take money from me when they know I’m a money magnet – more on that also later – and it perpetuates the idea that success is only real if it involves making a million dollars), but it’s become clear that I need to say it so you’ll take me seriously.

So, here it is … Since 2006, when I discovered the secret to online business success for real, the businesses that support my work have not brought in less than a million bucks a year.

Over the past couple of years when I “couldn’t” make money (a mental construct I created around my debt and BK), those businesses still brought in a million bucks.

That wasn’t my goal.

I was living on the farm, trying on a poverty mentality, and yet the structures I built to support my work continued to thrive even though I was seriously checked out.

To me, that’s the kind of success you really want – you want to know how to build businesses you can rely upon to operate without you, support the people around you and keep thriving even while you are in crisis.

Now that I’m out of crisis and back to the work of those businesses, they’ll do a couple million this year (maybe more) and I’m sure we will hit the Inc. 500 in the not so distant future (apparently that’s the new symbol of success).

But it won’t be like it was before. Now …

4. I meditate daily, OM twice a week and workout 3x/week for an hour. Plus I’m writing my next book. And have a thriving relationship with a man I love.

Back in the day when I was “successful”, I couldn’t find time to meditate EVER, working out was something I squeezed into 20 minutes here and there, and book writing was relegated to someday/maybe. I was traveling constantly, and forget the Joneses’, I was keeping up with the Browns, the Sasevichs, the Fredericksons and the Virgins.

And while I love those women, it was exhausting.

Now that I’m a “failure”, I don’t work on weekends, I’m well rested, my body feels great, and I’m no longer using marijuana to make it through the reality of my day to day.

Most importantly, I’m in partnership. Real, loving partnership with a man who meets me deeply on every level. So all this to say …

If you aren’t buying my programs because I share my failures so loudly, you just might want to wake up and see that the very thing you are avoiding is exactly what you really need. [click to tweet]

Sure, you can continue to learn from folks who wrap it all up in a pretty bow of “success”, but you’ll have to face the reality of failure at some point. And here’s what my work does for you – it lets you learn from my mistakes so you don’t have to repeat them.

By learning from me, you build your business with your eyes wide open, awake, aware, and on your terms.

If that’s what you want, we can help.

If you prefer to be a sheeple, follow the leader and do it monkey see, monkey do style with the hope that you can be one of the 1% of monkeys who can make it to “success” – go for it baby. I’ve been there, done that and it’s not all its cracked up to be.

But, listen, you just might be the type who has to make your own mistakes, learn your own lessons and fail along the way. Either way, we are here for you.